New Jersey became an English proprietary colony in 1664 and was divided into two entities, East New Jersey and West New Jersey, in 1676. In 1702 the Proprietors of East and West New Jersey surrendered the government of the colony to the Crown, and shortly thereafter the first New Jersey Assembly under the new Governor, Lord Cornbury, began meeting at Perth Amboy on 10 November 1703. One law resulted from this first session, “An Act for Regulating the Purchasing of Land from the Indians.” It was signed by the governor on 13 December 1703. Copies were then printed by William Bradford in New York sometime between 13 December 1703 and 25 March 1704. (Image at left.) This law is quite likely the earliest New Jersey provincial document to be printed. It is also likely that the New Jersey Assembly kept a copy for reference purposes.

During the next few years additional session laws, ordinances, and other governmental documents were printed. These printed publications formed the beginnings of a small reference collection kept by the Assembly for the use of its members. In 1711 the Assembly began printing its minutes generally referred to as the Votes & Proceedings. In the Votes & Proceedings the growth of this legislative reference collection is clearly documented, and one can track its development as it grew and eventually evolved into the library of the State of New Jersey.

Many of the publications acquired by the legislature during the eighteenth century are still in the New Jersey State Library’s collection. Seven acquired during the first three decades of the Assembly’s activities are listed below: 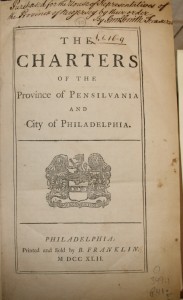 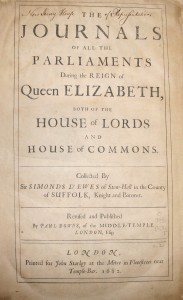 Beginning in 1738 the Assembly began acquiring books covering the laws of England, proceedings of the English Parliament, and the laws of neighboring colonies such as Pennsylvania and New York. The following are still in the collection today (two of the title pages can be seen here):

Leading up to the American Revolution

During the years leading up to the American Revolution, the Assembly continued to publish the laws of the colony including a collection of laws and related documents from the earlier proprietary period, 1664-1702. In addition to publishing governmental documents, the Assembly helped launch New Jersey’s first newspaper, The New-Jersey Gazette . Printed in Burlington, the first issue came out on 5 December 1777. Here are a few of the items from this period that can still be found in the library’s collection:

By the beginning of the Revolutionary War

By the beginning of the Revolutionary War the legislative reference collection which began with one four-page document in 1703/4 now consisted of at least 60 printed books, 8 manuscript volumes, and a number of loose pamphlets. During the war the collection was moved to wherever the government was meeting. As the war came to a close during the 1780s the Assembly began to again add titles to the collection such as the three below: 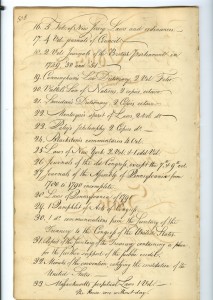 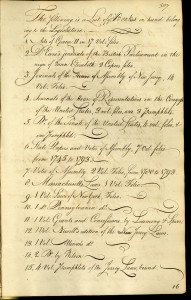 Many other books were acquired during the 1780s and 1790s. In 1796 the Clerk of the House, Maskell Ewing, was directed to “enter on the minutes of the House of this day the titles and names of the several books now belonging to the Legislature.” (The page images shown here are from the original manuscript and were provided by the New Jersey State Archives, Department of State.) Thirty-three titles appear on his list. A few not mentioned earlier are listed below:

In addition to listing the titles in the collection, the 18 March 1796 entry in the Votes & Proceedings for the first time assigns responsibility for the collection to a specific individual: “. . . and that he [Clerk of the House] be further directed to procure at the expense of the Legislature a suitable case for the keeping and preservation of such books; and further also, that he be responsible to the Legislature for the safe keeping and preservation of the same.”

Eighteenth Century coming to a close

As the eighteenth century came to a close, the Assembly began acquiring a broader range of books and even arranged for newspapers to be delivered for use of the members. A few titles added at this time are listed below:

By this time the legislative reference collection had become a library in both fact and name. The Votes & Proceedings on 24 February 1804 includes A Catalogue of Books belonging to the Legislature of New-Jersey, the first listing specifically identified as a “catalogue.” This catalogue lists seventy-five titles, more than twice as many as the list made in 1796. With multi-volume works and multiple copies of some titles, there were probably over 200 volumes in the collection at the time.

The Votes & Proceedings entry for 24 February 1804 also includes a set of rules: “Resolved, That the following rules be adopted for the regulation and preservation of the books in the library.”

The Library Collection by 1822 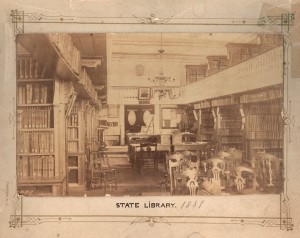 By 1822 the library collection had grown to the point where a full-time librarian was needed to manage it. “An Act for the better preservation of the Books and Papers belonging to the Legislature of this State” was passed 16 November 1822: “Be it enacted by the Council and General Assembly of this State, and it is hereby enacted by the authority of the same, That a suitable person shall be annually appointed, by the council and general assembly of this state, in joint-meeting, as a librarian of the two houses of the legislature, to serve for one year, and until another be chosen in his stead.”

By 1838 the collection had grown from the 200 titles of 1804 to over 800 titles. These titles probably represented two to three thousand volumes. Also, the Catalogue of Books in the New Jersey State Library was issued as an independent volume. The library has copies of two additional updated catalogues printed in 1847 and 1853. By 1873 the collection consisted of over 18,000 volumes and the library was well on its way to becoming the great research institution that it is today. Shown here is the earliest known photograph of the library.

For a more detailed description of this period of time in the history of the library, read Genesis of the New Jersey State Library, 1703 – 1796: A Documentary History.

ABOUT THE STATE LIBRARY