Researching our 19th century immigrant ancestors can be a challenging project because of the scarcity of some record types, inconsistencies between records, and a lack of verifying details. When there is a profound language difference, the complexity of this research increases exponentially. Tracing Chinese American ancestry can be particularly challenging because of the way names were recorded and transcribed.

Chinese names needed to be transcribed into the English alphabet for official documentation. A standardized transcription system, known as Wade-Giles, was widely used in the 19th century. The Wade-Giles system was largely replaced by a new system, Pinyin, in the 1950’s and is still in use today. For this reason, a family name transcribed with Pinyin may not match the spelling of an ancestor’s name transcribed with Wade-Giles. For example, the Pinyin transliterated names Zi and Cai would be written as Tzu and Tsai, respectively, in Wade Giles. You can learn more about Wade-Giles and Pinyin from these websites:

What’s the difference between Wade-Giles and Pinyin?

Despite Wade-Giles being in use by 1859, it would be unwise to assume every 19th century record transcriber understood or even knew of the system. At least some record takers would have written names phonetically as they heard them, creating different name spellings for a single individual among contemporary records. Dialects would have further affected these spellings.

In addition, many 19th century immigrants, including those from China, chose alternate names for use in America. In some cases, these were more Western-sounding names, like Mark or Sam. In other cases, names may have been selected for business purposes or to connect oneself with a more established person. In other cases, aliases were chosen for unknown personal reasons.

Identifying ancestors in official documents can be quite difficult, as is illustrated in the case of Sing Lee, a Chinese immigrant and business owner in Trenton in the 1890s. Very sadly, Mr. Lee was murdered in the laundry he owned at 160 North Willow Street on May 17, 1898. The case shocked the city and received wide coverage in local newspapers.

Without this newspaper coverage, it would be quite difficult to find any official documentation on Mr. Lee. Despite having his name and the exact date, location, and circumstance of death, a search for his death certificate at the New Jersey State Archives under “Sing Lee” and variations of this name returned nothing. Other typical avenues of research proved fruitless as well – Mr. Lee did not appear in Trenton on the 1880 Census and because the 1890 Census was largely destroyed in a fire in 1921, it was not searchable. Business records were not required to be filed with the State at the time and immigration records from Castle Gardens, New York, the main New York area port of entry at the time, did not provide an obvious match.

We find many useful details about Mr. Lee’s life in the newspaper articles covering his death, but even these details prove complex. One article states that Mr. Lee was also known as Eng Wing Fou. Another article offers more detail, stating his name was Eng Wing Foon, that he was 53, had been born in China to parents Hoong Sang and Dooey Man, and had arrived In New York ten years prior. He was also listed as having four sons, the eldest of whom, Eng See Ju, lived in Massachusetts and oversaw funeral arrangements. Another article suggested that Eng See Ju was Mr. Lee’s brother, not his son.

It was only by searching all deaths in Trenton for May 17, 1898 that a death certificate for Mr. Lee under the name Wing Fow was located, matching the known location and cause of death, and parents’ names.

Researching your Chinese American ancestors can be a deeply rewarding project, but given some of the unique challenges discussed above, the following tips and resources may be of help.

The New Jersey State Archives offers a searchable portal for marriage records May 1848-May 1878 and death records May 1848-December 1900. Name variations may need to be searched. All records can be viewed for free in the Archives or copies can be mailed for a fee, though no preview copy of the record will be available: https://wwwnet-dos.state.nj.us/DOS_ArchivesDBPortal/index.aspx#VS

Church records, local newspapers, and the collections of local historical societies may offer a wealth of information about the everyday lives and associations of ancestors. Your local public library may offer local history collections as well as provide access to local newspapers or commercial genealogy websites, like Ancestry or Family Search. Access points for New Jersey newspapers known to have been digitized are available here https://libguides.njstatelib.org/digitized-newspapers

Castle Gardens, NY, the main point of entry before Ellis Island, has some searchable records.

The Bancroft Library at University of California, Berkeley, has created a digital archive on Chinese immigration.

The University of California, Los Angeles, offers a Wade-Giles to Pinyin conversion guide

This research guide from the University of Texas, San Antonio, is another wealth of resources.

The Museum of the Chinese in America has built tremendous collections and offers research services.

Alice Kane, genealogist of the New England Genealogical Society offers a webinar and resources that may help your research.

The New Jersey State Library is proud to partner with Rutgers University and the New Jersey State Archives in the New Jersey Digital Newspaper Project, a collaborative effort to digitize, preserve, and promote New Jersey’s historic newspapers. Thanks to grant funding by the National Endowment for the Humanities, some 200,000 newspaper pages will be digitized, cataloged and made freely available to the public. 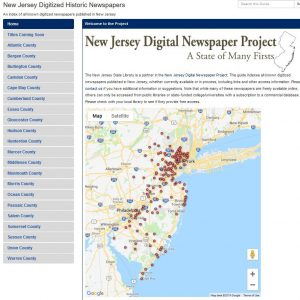 As a part of the project, the New Jersey State Library has created a guide of all known digitized newspapers in the State. This guide features an interactive map of New Jersey to help researchers identify which newspapers are available for a particular city or geographic region. The guide also lists digitized newspapers by county and city, with links to the digitized collection.

An Excel spreadsheet listing all newspapers in the guide is also available for download. Additional research resources, such as the New Jersey Newspaper Directory, 1765-1970, and the list of New Jersey local names have been made available as well.

To have your digitized newspaper project added to our list or to provide additional information about other digitized New Jersey newspapers, please contact Caitlyn Cook, New Jersey Reference & Digital Librarian