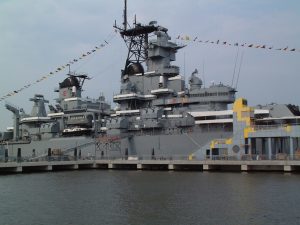 Jersey. The collection is available to historians, researchers, teachers, students, and the general public at the State Library, 185 West State St., Trenton. Researchers are able to search specific topics and then view or listen to the interviews while at the State Library.  A large portion of the collection consists of video interviews of veterans who served aboard the New Jersey during her four commissionings: World War II, the Korean War, the Vietnam War, and the Middle East conflict up through 1991. During these four periods, the Battleship New Jersey earned 19 battle stars to become the most decorated battleship in U.S. history.

The ship is now a museum and memorial permanently berthed in Camden, NJ. Deborah Mercer, curator of the New Jersey Collection at the State Library, said, “You can see and hear the workers describe how they built the Battleship New Jersey and the officers and enlisted men tell in their own words  from their personal memories how they served on the historic battleship.” “This is a one-of-a-kind oral history collection and we are pleased to be able to offer it to researchers and the general public,” said Mary Chute, State Librarian.

Dr. Thomas Banit, Professor Emeritus of history/education at Kean University and founder of the oral history program aboard the New Jersey, and a former Marine officer in Vietnam, stated: “This collection was built . . . with all-volunteer interviewers, videographers, transcribers, abstractors, indexers and historians. The program was initially funded by two grants from the Homeport Alliance, the group responsible for bringing the ship back to New Jersey.  We will continue to interview veterans and add to the collection, which is now considered the largest oral history archive of over 200 historic ship museums in the world.”

Ronald Gottardi, director of the Battleship New Jersey Oral History Program said about this relationship between the Battleship New Jersey and the State Library as it began: “The ship allows the public to visit and experience the physical setting for the history; the State Library will open the ship’s history to researchers, thus helping firmly cement the place of the vessel in its namesake state.” Included with the collection are transcripts and audio tapes of interviews by Cmdr. Paul Stillwell, USNR (ret.), noted naval historian, generated during research on his book, Battleship New Jersey: An Illustrated History,  Annapolis, MD: Naval Institute Press,  1986. These items are searchable in the BB-62 Oral History database.