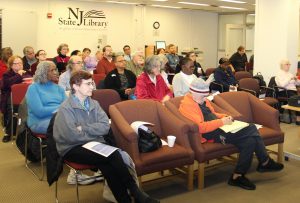 On Feb. 19, 2020, the State Library hosted an author talk with writer and historian Sue Kozel. During the talk, which the New Jersey Council for the Humanities funded, Kozel led her audience on an exploration of the life and murder of a New Jersey slave named Betty.

Betty, whose surname is indecipherable in historical documents, lived on land in present-day Upper Freehold. She was owned by a man named Arthur Barcalow. On April 9, 1784, as Kozel explained, Barcalow killed Betty with a blow to the head reportedly because Betty disobeyed an order. We’re unsure if the supposed infraction was a misunderstanding or an act of rebellion. What we do know for sure is that the State of New Jersey indicted and charged Barcalow with Betty’s murder.

The case was heard in the Monmouth County Oyer and Terminer Court where Barcalow’s relatives testified they were in the house at the time of the murder but didn’t see the crime in action. According to a coroner’s report, however, Barcalow did in fact murder Betty. Barcalow, who had been in the sheriff’s custody throughout the trial, was found guilty but freed from prison. The court ordered Barcalow to pay 500 pounds for Betty’s life.

Two years after the case was closed, no laws were put in place as a direct result of Betty’s murder; however, killing a slave was indeed a crime in New Jersey. Quaker abolitionists, particularly a man named Richard Waln, protested that black slaves possessed a natural right to liberty. Betty didn’t get the opportunity to experience that liberty, but her death set a precedent for black life and justice to come.

Sue Kozel has spent her life addressing uncomfortable questions related to power and equality. In 2020, she will be a residential fellow with the International Center for Jefferson Studies. Kozel received a 2009 Mini-Grant from the New Jersey Historical Commission to research Quaker abolitionist Richard Waln. This grant led to several American and international conference presentations and the publication of her first co-edited book, Quakers and their Allies in the Abolitionist Cause, 1754-1808. She currently teaches at Kean University, Mercer County Community College, and William Paterson University at Mercer.