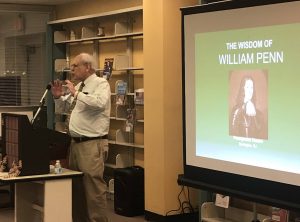 Historian Erik L. Burro visited the New Jersey State Library on Tuesday, October 8 and spoke to 57 community members, including State Library and Thomas Edison State University staff and New Jersey state employees. While at the library, Burro presented a history of William Penn’s influence in New Jersey and in the Delaware Valley to celebrate Penn’s 375th birthday. Burro explained that while Penn is better known for his time in Pennsylvania, he was a principal signatory to the Concessions and Agreements of the Proprietors, Freeholders and Inhabitants of the Province of West New Jersey in 1676—five years before becoming Proprietor and Governor of Pennsylvania and Delaware. Penn was a major influence in the emergence of civil rights, representative government and religious freedom in early America, and he had an influential role in preparing colonists in America for eventual independence from Great Britain. Penn was one of eight individuals to whom the U.S. Congress granted Honorary American Citizenship.

Burro is a historian, photographer, re-enactor and founder of the Pennjerdel House, a regional advocacy for increasing public awareness and appreciation of local history and preservation throughout the tri-state area. In the past 40 years, he has made a variety of appearances as a guest speaker, master of ceremonies, host for cultural events, re-enactor of historic characters both here and abroad, and a creator and participant in exhibitions on history-related topics. William Penn is one of the characters Burro reenacted in five countries and 12 states.