Those living in the proximity of a historic city, like Trenton, may frequently take it for granted and overlook the many recreational, educational and entertainment venues available. New Jersey has a wealth of history dating well before the Revolutionary War, with the last of the barracks built to house British soldiers located right in downtown Trenton. 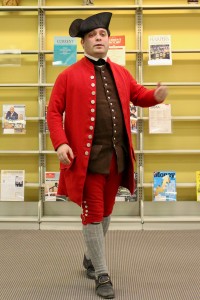 In a change from its usual lunch time author talk programs, the State Library enlisted a re-enactor to tell the tales of the Old Barracks, located just around the corner from the library. Asher Lurie, of Yardley, Pa., has been an interpretive history researcher at the Barracks since 2009. Dressed in colonial military garb, he began his presentation many years before the Revolution, when citizens considered themselves British and very patriotic.  Boarding British soldiers in their homes during the winter was a requirement back in 1758.  When William Pitt decided to reimburse the colonies for this “intrusion,” New Jersey decided to build five barracks, in Burlington, Trenton, New Brunswick, Elizabeth and Perth Amboy, to house the soldiers during the harsh winters. The Trenton barracks is the only one still standing.

Now the colonies had always taxed themselves, but with Great Britain running short on cash due to the French/Indian War, Parliament imposed taxes on the colonies which resulted in the colonist’s uprising.

Through the years, the barracks was used for recruiting soldiers, as a place to hold British prisoners, and from 1777 to 1783, as a hospital.

Today, the Old Barracks welcomes visitors as an educational center for Colonial, American and New Jersey history. It is one of the most visited sites in New Jersey seeing more than 18,000 school children and thousands more people from around the world. One of the most important historic sites in the United States, staff provide guided tours and interpretations of American colonial life. The building also has a museum of 18th century artifacts and weapons. Pay a visit to the Old Barricks. Learn more at: http://www.barracks.org/