According to Joseph Cummins, author of Anything for a Vote, there were only two clean political campaigns in American history, and that is just because George Washington ran unopposed.  After that,  slurs, insults and dirty

tricks were the norm with Thomas Jefferson labeled a hedonist and atheist by John Adams, who was called a “hideous hermaphrodite” by the Jefferson supporters.

On Super Tuesday, March 1, from noon to 1 p.m., the New Jersey State Library presented a free author talk with Cummins based on his book. Today’s political pundits express shock and disappointment when candidates resort to negative campaigning, however, history reveals that smear campaigns are as American as apple pie. The book on which Cummins’ talk was based, Anything for a Vote: Dirty Tricks, Cheap shots, and October Surprises in U.S. Presidential Campaigns, covers more than 225 years of mudslinging, character assassination and other election strategies. Looking at current tactics, it was clearly apparent that history does repeat itself: the Adam’s campaign reported that Jefferson was dead; 219 years later, the Cruz campaign reported Ben Carson’s campaign was dead!

Whig party leader Thomas Elder said in 1840: “passion and prejudice properly aroused and directed do about as well as principal and reason in a party contest.” It also seems true that Americans will believe anything as long as they have a predisposition to believe it – whether it is possible or not. 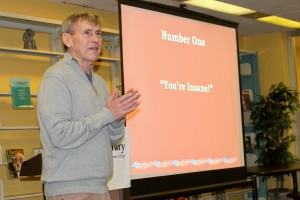 Nutmeg dealer did not make Cummins’ Top Ten Campaign Insults, but “you’re insane!” came in at number one.

In 2016, “liar” and “con man” have replaced insanity as the campaign becomes one of the nastiest in history – and this is just the primaries. Stay tuned or try the nutmeg thing. It couldn’t hurt.

Cummins has an MFA in Creative Writing from Columbia University, is a MacDowell Colony Fellow and has held numerous positions in the publishing industry, including creative director of the Book-of-the-Month Club. He is passionate about the stories of history that remain relatively untold—he chronicles the dirty tricks of American politics in Anything for a Vote; the forgotten Revolutionary era tea party protests in Ten Tea Parties; the stories of shipwrecked sailors throughout history in Cast Away; and the strange tales of daring naturalists in Eaten by a Giant Clam. The Maplewood resident is an adjunct professor of English literature at Hudson County Community College in Jersey City.