Trenton’s annual Patriots Week celebration runs from Thursday, December 26, 2019 through Tuesday, December 31, 2019.  Attendees learn about the events and people from Trenton’s history during the Revolutionary War.

History is a study of the past.  This includes the action of people and the occurrence of events.  What sources do researchers use when writing history?

The New Jersey State Library contains original and copies of historic documents, reports, and maps that represent primary, secondary and tertiary sources. That’s why historians love to use our collection and find it to be so valuable in the work they do.

A primary source is a first person account of an event.  Letters, diaries, photographs, or eyewitness accounts from news reports all give a sense of what occurred at the time of an event and are are key to understanding history. For example, Continental soldiers compiled a list of Hessian soldiers taken prisoner following the Battle of Trenton on December 26, 1776.  A transcriptions of the original document provides primary source information.  The original document includes the name, rank, unit and disposition of each soldier captured. Historians and and genealogists appreciate this very specific level of information.

In 1778 General George Washington wrote an open letter to the residents of New Jersey, Pennsylvania, Delaware, Maryland and Virginia.  In it, he asks for support in the way of provisions for his troops in order to continue their campaign against the British.  This letter, with its lofty ideals and eloquent reasoning, is a primary source that was published in the New Jersey Gazette on Wednesday March 4, 1778.

General Washington’s letter is juxtaposed with an advertisement in the same Gazette issue calling for the return of an enslaved man named Levi who fled his enslaver.  Here is a primary source providing two very different stories from the same point in history.  Sources like this give historians a lot to discuss and interpret about the different struggles for freedom occurring at the same time. These discussions and interpretations become secondary sources and are key resources for other researchers to use. 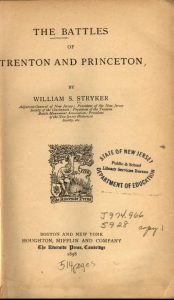 William S. Stryker (b. 1838, d. 1900) researched and wrote about some of the most important historical events pertaining to New Jersey and the Revolutionary war.  He used many primary source documents and included them in the work he compiled.  His commentary and interpretation of the events that occurred in his work titled The Battles of Trenton and Princeton make his original writings secondary sources.  This particular title is priceless to many researchers and history buffs.

Here is an example of the author describing the significance of a correspondence from Colonel Joseph Reed to Colonel von Donop, followed by the text of the original correspondence.

As part of Patriot’s week, on December 26th the State Library will be hosting author William ‘Larry’ Kidder to discuss his book, Ten Crucial Days: Washington’s Vision for Victory Unfolds.  This program will be from 12 pm to 1pm on in the Level 2 Reading Room of the State Library.