History is made everyday by ordinary people, much of which relates to our own family history.  The story of our families is unique and well-worth preserving.  One way we try to preserve that history and the memories of our loved ones are through cemeteries.  As we continue to celebrate Black History Month, Cherekana Feliciano, from the Afro-American Historical and Genealogical, will touch on this very personal aspect of history by examining African American cemeteries in New Jersey.  She will provide an overview of the history of these cemeteries in New Jersey, their current state and what the future may hold for them, including examining what role/responsibilities the general public and the African American community at large has in ensuring their upkeep and survival.

Thank you to Margaret Jerrido and Dr. Judith Giesberg for showcasing their collaborate project Last Seen: Finding Family After Slavery.  Several years in the making, Last Seen is a searchable database of “Wanted” ads from nineteenth and early twentieth century newspapers, focusing on slaves and former slaves.  These documents contain wonderful nuggets of information for anyone conducting genealogical research with slave ancestry as well as highlight the importance of reuniting families for African Americans in the decades after Emancipation.

For example, here is an ad from the Philadelphia Times from July 8, 1889 for woman from Red Bank, NJ looking for her son:

One of the great aspects of Last Seen is that is a free database; no payments or subscription fees required.  As such, the team behind Last Seen relies on the help of thousands of people who volunteer their time to transcribe the ever-growing collection of records.  If you would like to sign-up to be a transcriber, please visit http://informationwanted.org/sign-up.

Another great feature of Last Seen is the geographical overlay of all of the records.  Here is a screenshot of the Eastern Seaboard, showcasing many records and their corresponding locations: 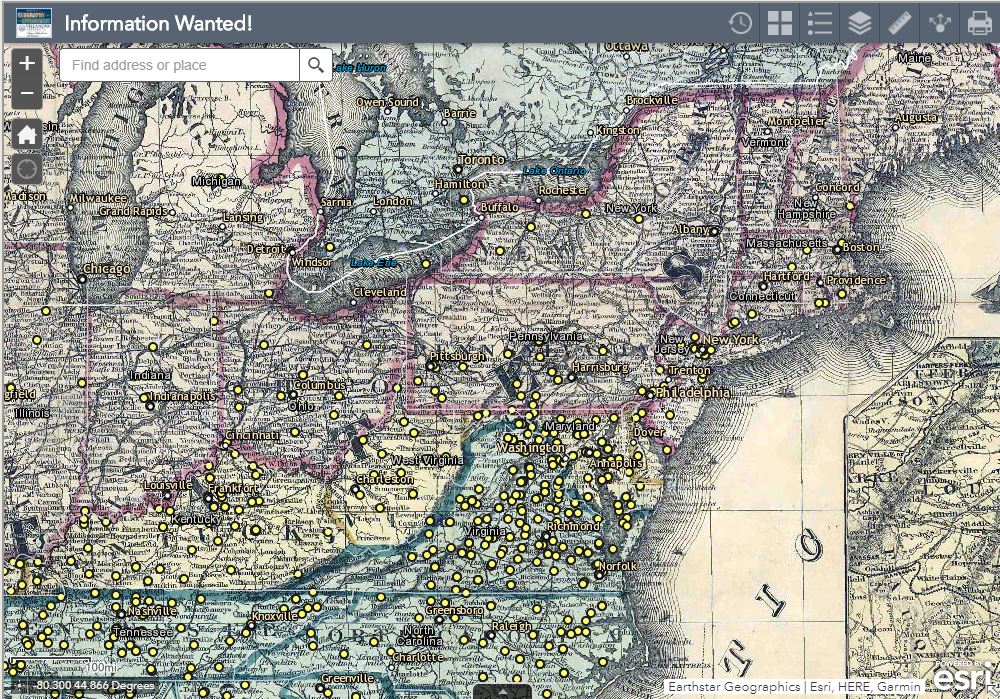 If you have any questions about the project, records, or any other aspect of Last Seen, please complete the form at http://www.informationwanted.org/contact.

In honor of African American History Month, please join us for as Dr. Judith Geisberg and Margaret Jerrido showcase a wonderful resource for tracking down ancestors who were slaves.  Before slavery came to an end, enslaved families were routinely separated when “owners” sold mothers away from children, husbands from wives, sisters away from brothers.  The heartbreak of these separations has lived on to their descendants, who today try to fill in their family trees.  For two years, Dr. Geisberg and Ms. Jerrido collected “information wanted” ads taken out by former slaves searching for their loved ones lost in slavery.  The project began by collecting the ads found in The Christian Recorder, published by the African Methodist Episcopal Church.  To date the Last Seen project has identified more than 3,000 of these ads, digitized them, and made them available on the project website, where researchers and family genealogists can search the ads by proper name, location, circumstance of separation, and other events.  The site offers new avenues for genealogists to search their family history.

Margaret Jerrido received her BA, in history, from Temple University.  She received her MLS with a concentration in archival management from Drexel University. She has worked in the archival field for over 35 years.  She was the Director of the Black Women’s Physicians Project at the Medical College of Pennsylvania; Director of the Urban Archives in the Temple University Libraries; and is currently the part-time Archivist at Mother Bethel AME Church in Philadelphia. She is a member of the Delaware Valley Archivists Group (DVAG) and the Mid-Atlantic Archives Conference (MARAC).  Ms. Jerrido has conducted workshops on how to preserve historical materials, lead discussion groups on how to begin an archives, and participated in panels and workshops on how to conduct oral histories to the PA Genealogical Society and the African American Genealogy Group.

Thank you to Vivian Thiele from the New Jersey State Archives for an unprecedented and revealing look into how African Americans appeared before the NJ Supreme Court in numerous ways during the early colonial and post-Revolutionary War time periods.  One of most common ways Africans Americans appeared in the records of the NJ Supreme were through writs of Habeas Corpus to appear before the court for testimony as well as releases of recognizance, paid by slave owners, so that slaves were able to be “free” and work rather than remained imprisoned while awaiting a trial.   There are also instances where African Americans are named in Replevin lawsuits as stolen property, where one can also find supporting documents about the history of the individual African American, including bills of sale or transfer.  Lastly, Vivian touched on how certain judicial officials can be found repeatedly on different court documents relating to African Americans and how we can use that information as well as their decisions to glean more about their views on slavery, including early abolitionists, such as Joseph Bloomfield.

The records of the NJ Supreme Court relating to slave cases are currently being digitized and are not available online.  However, there is a online database of all of records of the NJ Supreme Court that can be filtered by different criteria, including ethnicity.  There are 463 records that can be found currently under the African American ethnicity criteria.  The database is available at https://wwwnet-dos.state.nj.us/DOS_ArchivesDBPortal/index.aspx.